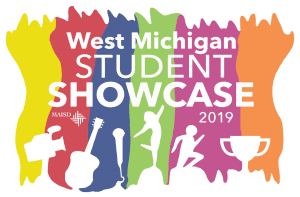 MUSKEGON, MI: Teens from Kent, Mason, Muskegon, Newaygo, Oceana, and Ottawa counties have a new way to showcase their digital media arts talents as part of the popular student event coming up on Wednesday, April 10, and Thursday, April 11 at the Frauenthal Center in Downtown Muskegon. West Michigan Student Showcase 2019, a celebration of excellence for high school youth, begins at 7:00 p.m. both nights.

“The production team wanted to modernize the show. Digital media arts, also known as video, is one of the newest, most influential areas of the arts. Our students interact with video more than ever before as they consume and create content on websites like YouTube and apps like Tik Tok,” said Joel Selby, Showcase Executive Producer.

The student director of each Digital Media Arts entry will be presented on stage during the show and a 30-second trailer for their entry will be shown.

Selby explained that other changes are in the works as well. “In order to attract more general audience members, and realizing that we are adding a new category to an already long show, the production team decided to move the recognition of our Academic and Athletic Honorees from the stage to our printed program and website. We want to acknowledge these students’ accomplishments while also keeping the show entertaining and focused on our nominees who are competing in the arts,” said Selby.

West Michigan Student Showcase has been largely unchanged since it was created in 1981 by Gary W. Ostrom, Publisher at the time of The Muskegon Chronicle. Responsibility for the program was transferred to the Muskegon Area Intermediate School District in 2012.

Over two nights since 1981, around 250 students are recognized in five categories–academics, athletics, performing arts, and visual arts. In 1985, Literary Arts and the Gary W. Ostrom Showstopper Award were added. Performing Arts was divided into two categories, Solo/Duo and Group, in 1987.

Another Showcase tradition is the selection of a student-designed logo. For Showcase 2019, Andrew Greiner, a senior from Careerline Tech Center in Ottawa County submitted the prize winning entry out of 56 total entries. All student artists received a certificate for their portfolios.

West Michigan Student Showcase is an annual celebration of excellence for high school youth of West Michigan. Students are selected by their respective schools in the areas of academics, athletics, digital media arts, literary arts, performing arts, and visual arts. Since 1981, high school students from Kent, Mason, Muskegon, Newaygo, Oceana, and Ottawa counties have had an opportunity to be recognized. For many of our student nominees, this will be the shining moment of their high school years – for others, the beginning of an amateur or professional career as actors, musicians, writers, athletes, and artists.