Many cities across America have great art museums and iconic art pieces. New York has the Metropolitan Museum of Art, Washington, D.C, has the National Gallery of Art, and Chicago has the Art Institute of Chicago. Muskegon, while still being a small city, still manages to pull off having a great art collection that rivals the collections of larger cities.

Established in 1912, the Muskegon Museum of Art was created through a grant donated by Charles Hackley that was used to give the city ‘pictures of the best kind.’ Some of the works on display in their permanent collection include John Steuart Curry’s 1929 painting “Tornado Over Kansas”, Edward Hopper’s 1922 work “New York Restaurant”, the only Hopper painting to be on display in Michigan, and the Dutch Renaissance painting “St. Jerome in Penitence”, painted between 1516-1518 by Joos van Cleve. The painting is currently part of the exhibition “The Rise of Print: Rembrandt and Company” which shows the museum’s collection of fine European prints of the 15th and 16th Centuries, including Albrecht Durer’s iconic 1514 engraving “Melencolia I”, a print that has made many appearances in media and is a popular subject of discussion among art historians. Pieces from the Muskegon Museum of Art are regularly loaned out to other art museums around the United States and Europe. 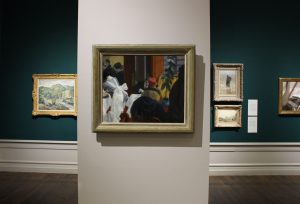 The museum also has exhibits that appeal to a wide variety of audiences beyond fine art enthusiasts. In the past, the museum has hosted Lego exhibits, film and animation showings, as well as the recent ‘Dressing the Abbey’ exhibit which shows the costumes and props that were used on HBO’s hit TV show ‘Downton Abbey’.

“We really love to work with our neighbor organizations,” said Catherine Mott, the assistant director of the Muskegon Museum of Art. The Downton Abbey exhibit also featured antiques that the Lakeshore Museum Center had to fully illustrate what daily life was like at the start of the 20th Century. Exhibits like this, as well as the recent MiniARTure Golf Course, which introduces kids and their families to the collection in a fun and interactive way, shows that art is for everyone to enjoy. “We promote the idea that everyone belongs in a museum. There’s something for everyone here,” Mott says. “[the museum] is small, it’s welcoming, and there’s so much to see.” 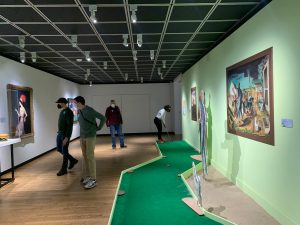 Public art is another element of visual art that Muskegon excels in with over 40 pieces on display throughout the city. The most iconic work of public art in downtown Muskegon is Richard Hunt’s 2008 sculpture “Muskegon, Together Rising”, a torch shaped sculpture at the 3rd St. roundabout that symbolizes Muskegon’s bright future. Other public works include Anishnaabe artist Jason Quigno’s 2018 sculpture “All My Relations (Niikonii Kiinaa)” a sculpture about Native American culture located at the Muskegon Visitor’s Center, “What Defines Muskegon”, a mural by Dr. Hubert Massey about Muskegon’s history and culture that was installed on the Trinity Health Arena in 2021, and “Sculpture with Stars”, a vibrant 1992 sculpture by James Clover that gives life to the Celebration Square in front of the Muskegon Post Office. The Lakeshore Museum Center’s 2019 sculpture “Moxie the Mastodon” is a whimsical tribute to the area’s prehistoric animals that once lived here thousands of years ago. 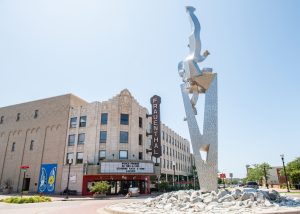 Muskegon, Together Rising by Richard Hunt

Muskegon is a city that values the arts by making many great pieces accessible to its residents, while also reminding people that art is all around us. “As the Hopper hangs in the Whitney Museum in New York, the label will say ‘Muskegon Museum of Art, Michigan’ and that represents us to the world,” Mott says.