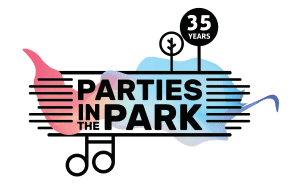 Now entering the 35th season of bringing quality, affordable, family entertainment to downtown Muskegon on Friday nights in the summer, Parties in the Park is unveiling some big changes for the 2019 season.  Guests can look forward to expanded entertainment offerings, new non-profit partners, additional party enhancements and more!

The 2019 lineup for the 35th anniversary season includes:

“We are really excited about what’s in store for our 35th anniversary season,” says Chanda Cregg, Parties in the Park President. “We have a lot of new non-profit partners, and have really expanded the entertainment offerings to include local, regional and even nationally known acts.”

According to the Parties in the Park entertainment committee, “this will be our most diverse band line up ever.”

The season kicks off with Michigan’s own critically acclaimed “Princess of Rockin Blues” Sharrie Williams and the Wiseguys. Sharrie has performed in over 30 countries over the last 20 years. She will be joined by local favorite and Jammie Award Winner the Vincent Hayes Band for a night of high energy blues.

Orquesta Tradicion, performing June 28, is one of the hottest Latin bands in the Midwest featuring brothers Luis & Xavier Rosario. Now based out of Grand Rapids, this band has won several Detroit Music Awards.

In July, Parties in the Park welcomes local country music icon Bari Lee who has been performing since the age of 8 years old at music festivals and concerts.

Melophobix will kick-off the August parties with a “cage free” performance. They are a horn-hued fusion of rock, funk, reggae, and more. They will be joined by the Paddlebots for an eclectic mix of R&B soulful music featuring amazing vocals and a “killer” horn section.

This year the islands are coming to Parties in the Park with “De Hurricane Reggae Band”. Once voted Chicago’s best Reggae band, they are often seen playing at Chicago’s famous “Wild Hare” reggae club.

The 35th anniversary season will close out with NBC’s “The Voice” 2016 season finalist Laith Al Saadi. “The best show of musicianship I’ve ever seen on The Voice,” according to Adam Levine. Entertainment Weekly called Laith “a power performer who is legitimate and memorable”.  In 2006, Guitar Center crowned him one of the top four blues guitarists in the United States! Hailing from Ann Arbor, he has been touring all over the world for the last two decades and recently opened for Bob Seger on his 2019 farewell tour.

“With expanded entertainment offerings and new non-profits joining some of our past party hosts and bands, we’re very excited about the potential for new party goers to attend Parties in the Park this upcoming season,” says Cregg.  “We’re continuing to expand children’s activities, craft beverage offerings, and are looking forward to welcoming many new local food vendors to this summer’s Parties in the Park.”

The 35th anniversary season is presented by Best Financial Credit Union and Bud Light. Parties in the Park hours are 5-9pm are parties always FREE to attend. To learn more about Parties in the Park, join the mailing list, volunteer at a party, or see frequently asked questions, visit www.partiesinthepark.com – and stay tuned to the new website launching soon.

The Mission of Parties in the Park is to create a sense of community and appreciation for Muskegon’s Downtown through a family-oriented social event. Hosted by a variety of Muskegon County not-for-profit groups, the proceeds from the Parties either make physical enhancements or quality of life improvements for the whole community.