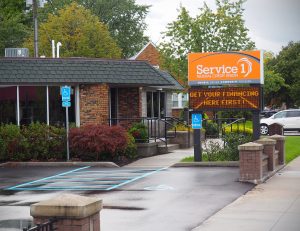 SB Community FCU’s nearly 2,000 members were added to the Service 1 FCU membership as of October 1, 2019, bringing the overall membership to more than 21,000 in three states: Michigan, Missouri and Alabama.

“We’re excited for the opportunity to serve SB members with enhanced services over a larger network of locations,” said Service 1 FCU CEO Kim Bourdo. “Adding this location in Roosevelt Park makes us stronger, more convenient, and well equipped to competitively serve members into the future.”

Longtime SB Community FCU CEO Pam Hanophy announced her retirement with the transition. “Dedicating my career to the credit union movement has been an honor,” remarked Hanophy. “I’m grateful to have worked with a wonderful board of directors and many talented individuals whose mission is to improve the lives of members. The highlight will always be the wonderful people I’ve met.”

Hanophy led the $13.2 million credit union through changes in the financial landscape for 22 years. She served on the M.O.O.N. Chapter of Credit Unions Executive Board and on the board of the Michigan Credit Union Foundation, and is a board member of the Roosevelt Park Downtown Development Authority. She began serving as the supervisory committee chairperson for the Service 1 FCU Board of Directors in November.