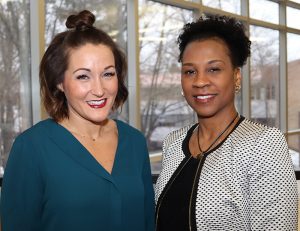 The MCC instructors, Amy Herrington and Yolanda Burris, and the three MCC nursing students – Jennifer Vannortwick, Bailee Gorecki and Brittany Johnson – were in town for the nearby annual Michigan Nursing Student Association Convention. Their late night workout in the hotel’s facility was interrupted by screams.

“A kid came running down the hallway yelling, ‘There’s a baby in the bottom of the pool!’” recalled Herrington, who normally would not have heard the cries but opted this night not to blare music during her workout.

“We both stopped immediately,” added Burris, who originally thought about staying at a different hotel. “Amy ran out first and I followed her.”

The duo, who are registered nurses, darted around the corner to the pool area, pushed aside many of the nearly 30 people congregated, and made a bee line for the toddler now lying motionless on the pool deck.

“A lady had pulled the baby out of the pool and started CPR,” recalled Burris. “She was trying to do her best, but I taught CPR and it did not look effective to me.”

“I am not an assertive person, but I pushed the lady out of the way,” said Herrington, the mother of two small children.

She immediately began sets of 15-30 chest compressions interrupted each time by Burris breathing twice into the young boy’s mouth. Meanwhile, Vannortwick, a student with some emergency room experience, had followed the instructors into the pool area, where she commandeered a phone and kept in continuous communication with 911. The other two MCC nursing students remained in the hallway to ensure a clear path for the EMS personnel who were in transit.

“People were yelling, crying and screaming, so our students were instrumental in getting people to move away from the scene,” noted Burris.

Meanwhile, the minutes seemed like hours to the two MCC faculty members who worked ceaselessly to save the youngster.

“I know what being scared is and, when we were in the middle of CPR, I looked over at Amy and I thought what have we got ourselves into because we didn’t think he was going to come back,’” said Burris. “We were there for quite a while. I believe it was more than two minutes, but it felt like an eternity. We didn’t hear any breathing. He wasn’t responding. He wasn’t doing anything and I could hear Amy’s voice increasing.”

“I remember thinking if this kid is not OK, then I am never going to be OK,” admitted Herrington, eventually switching CPR roles with Burris. “I worked in the ER a little bit where there is a whole healthcare team assisting and we have the equipment we need to do our job.”

“But it was just us,” said Burris. “People were depending upon us, especially K.J. People were running around, screaming. Finally everything got under control. You could feel they were looking at us to bring this child back.

“I have never prayed more in such a short time,” added Herrington.

Then a miracle happened.

“I was in the middle of doing compressions and his eyes opened,” said Burris.

K.J. began breathing and made some faint whimpering sounds. The nurses placed him on his side for a few seconds before Herrington scooped him quickly to her chest and wrapped her arms around him. “Mama Bear in me just went into effect. I knew he needed a hug. He cried for a minute, so that’s when I turned so he could see his Mom.”

By then, the paramedics had arrived and took K.J. from Herrington and transported him to the hospital. In the hallway, Burris met K.J.’s aunt and got her contact information to keep posted on the youngster’s progress. Back in their respective rooms, the two nurses broke down into tears from the enormity of what they had just experienced. The next day’s breakfast allowed for an impromptu debriefing with the MCC nursing students.

“The strength, courage and natural instinct of our instructors was immensely inspiring,” noted Brittany Johnson. “As nursing students, it is important to know that we are being taught by the best instructors; this is clearly shown through the staff here at MCC.”

Days later, though, Burris and Herrington were still overwhelmed by and replaying in their minds what they had witnessed.

“I still feel really nervous,” said Burris. “I am kind of saddened that it happened to them, but I am also thankful that he’s OK. People are calling us heroes. I don’t feel like it’s anything that I have done. I did what we were trained to do, what I learned to do. I never thought in a million years we would put it into action on a two-year old baby. To be honest with you, I really and truly believe it’s a miracle from God.”

Herrington concurred with the lasting mixed emotions and the belief of divine intervention.

“I feel like He gives us the gifts and the qualities that we pass on to other people,” continued Herrington. “He put us there because He knew we could do it. There are a lot of things that led us to being at that spot.”

The next day after the incident, Burris received a heartfelt text message from K.J.’s mother, who was still grieving from the loss of her own mother to cancer months earlier.

“I just wanted to thank you and your friend and co-worker so much,” she wrote. ”I wish I could hug you both a million times because I thank you a million times more. You both forever will be our gift from God at a very dark moment. I believe God makes no mistakes and he sent his two angels on earth to save my son. I truly, truly thank you ladies with everything within me for saving my baby’s life.”