Muskegon Area First (MAF) hosted its first Legislative Orientation Day for area legislators on Friday, March 22.  Legislators attending included Representative Terry Sabo and Senator Jon Bumstead, as well as staff from Governor Whitmer’s office, Poppy Hernandez, and U.S. Representative Bill Huizenga’s office, Sarah Lisman and Palmer Rafferty.  Muskegon County Commission Board Chairperson, Susie Hughes, along with Commissioners Bob Scolnik and I. John Snider also attended. Darryl Todd, Interim President & CEO of MAF, was excited about the event. “We were thrilled to host our Muskegon area legislators for the day. Several State departments were represented, and staff outlined their programs and incentives that directly affect our companies and projects here in Muskegon. We also enjoyed a fun and educational tour of a variety of company and project sites on one of the Muskegon County trolleys.”

The event included presentations from the Michigan Economic Development Corporation, Michigan Department of Environmental Quality and the Michigan Department of Agriculture & Rural Development, and a project overview from Darryl Todd, which included projects in the northern part of the County of Muskegon, including Arconic, Tannery Bay, Muskegon Business Park, Business Park North, Howmet Playhouse, and the Whitehall Athletic Complex. Afterwards, legislators and other participants boarded the trolley for a first-hand tour of several projects within the county. Sites and projects included those in downtown Muskegon and along the Lakeshore, such as Pigeon Hill Brewing Company, Terrace Point, Heritage Square Homes, the former Ameribank building, and Windward Point. The group then enjoyed an update along Sherman Boulevard, including brownfield redevelopment sites in Roosevelt Park, a beautification project that includes several municipalities, Mercy Hospital, downtown Muskegon Heights and then Fruitport Township and Norton Shores. Anthony Chandler, Administrative Services Director, Norton Shores, and MAF Chairperson, said, “The tour was set up by MAF staff to provide a direct experience for elected officials to view the economic activity occurring throughout Muskegon County. It was a great opportunity for all of us to be a part of the tour and to share our own stories of economic development in our various communities. ”

The legislators stopped at Motion Dynamics, manufacturer of precision wire components, springs and wire assemblies. MAF assisted Motion Dynamics in receiving an Industrial Facilities Tax Abatement from Fruitport Township, and construction for their addition is currently underway. Chris Witham toured the group through their high-tech, advanced manufacturing facility where coil springs as small as a fraction of a person’s hair are produced for medical device applications. The legislators were presented with a small bag of several types of coil springs manufactured by the company, which primarily serve the medical device and aerospace industries.  The trolley then went through the new housing development, Odeno, Place of Many Hearts, and the former racetrack property, future home of the Little River Band of Ottawa Indians (LRBOI) casino.  Along the Harvey Street Corridor, retail and commercial projects such as the soon to be built AutoZone, Chik-fil-a, and Lakeshore Cancer Center in Norton Shores were pointed out.

The tour then made a stop at La Colombe, manufacturer of draft lattes in a can, in the Norton Industrial Center.  This is another company that received an Industrial Facilities Tax Abatement, working with the City of Norton Shores and MAF. Legislators were presented with new coffee flavors, including Caramel Draft Latte and Cold Brew Shandy Grapefruit. Jason Murray, General Manager, boarded the trolley and gave a brief history of La Colombe in Norton Shores. Since opening in 2017, with 37 employees, the company has grown to 120 workers. Next the tour traveled past property where Renishaw, currently located in Grand Haven, plans to relocate and expand. The group then explored developments in the Muskegon County Airport Industrial Park, which included vacant lots where Blue Photon plans to expand, Smart Vision Lights’ facility, which is currently under construction, and a recently completed expansion by Inter Dyne Systems. Traveling to the commercial and residential section on Henry Street in Norton Shores, the group rode past the former K-Mart site where plans are underway for a mixed-use development and the Henry Street & Seminole Road corridor where place making plans are in the works.  The final stop on the tour was at the proposed Cottages at Mona Kai, a 36 single family condominium development, and M Kea II, LLC’s proposed 224 unit multi-story apartment and condominium community.

Attending legislators found the event beneficial in many ways. “The Legislative Orientation Day was a great opportunity to connect with business and community leaders in Muskegon,” said State Senator Jon Bumstead. “Our community has made tremendous progress, and I look forward to working with Muskegon Area First and everyone in attendance to continue developing high-quality business and employment opportunities throughout Muskegon County.”

Representative Sabo indicated that this event was important in highlighting the growth and activity in Muskegon to others. “The Greater Muskegon Area has come a long ways over the last few years with new development. To continue the positive momentum, it is important that we make those from all across our state aware of what we have going on here on Lake Michigan’s shoreline.” He added, “When we work together it proves that positive results are possible and it makes me proud to showcase our hometown to folks from across the entire state.”

The event was funded by DTE, Consumers Energy, the Lakeshore Chamber of Commerce and Downtown Muskegon Now. MAF anticipates sponsoring similar events in the future. Partnerships between Muskegon area legislators and the local companies, developers and economic practitioners is essential as Muskegon County continues its economic growth. 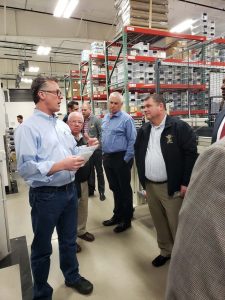