MUSKEGON, MI – A leading Muskegon County Credit Union will establish a new downtown Muskegon
presence at the same time as it introduces new interactive teller technology in the local market.
Family Financial Credit Union will open its third branch office in the street level of High Point Flats, the eight-story
mixed-use apartment building at West Western Avenue and First Street. FFCU will lease 3,500-square-feet from
Parkland Properties, developer/manager of the 47-market rate apartments that have been 100 percent occupied since
opening earlier in 2018.

“For the credit union, this is an opportunity to expand our services to a new customer base,” said FFCU Board
Chairman Dave Stamy, a retired engineer from Sealed Power/SPX and owner of Twin Lake Auto and Tire. “Our
strategic plan is to branch out into the community. There is a new excitement in downtown Muskegon where they
need our credit union services.”

FFCU will be creating a “downtown community center” with the new branch which will share the main level
commercial space with another new Parkland tenant, Boom Town Market – a long awaited convenience food store
in the heart of the downtown.

The credit union space will have a “café-feel” with WiFi Internet service as the public –members and
nonmembers alike – will be encouraged to work and socialize in the branch space, according to FFCU CEO Deb
Dietz. The credit union’s interior space will be built out by Muskegon Quality Builders with as many local
subcontractors as possible, she said.

The downtown branch will be equipped with two new interactive teller machines, which work as an ATM but
with much greater service-providing capabilities and interactive video with credit union staff. The new downtown
credit union branch will open in the first half of 2019 with a staff of 8. FFCU staff will offer retail accounts,
consumer loans, mortgages and commercial loans from the new branch but credit union headquarters will remain in
Norton Shores at 3575 Henry Street. FFCU also has branches in North Muskegon at 1798 Holton and in Hart at
4075 Polk.

FFCU began as the Sealed Power Employees Federal Credit Union in 1942 and received its community charter
as Family Financial Credit Union in 2004. Overall, FFCU has $113 million in assets, 16,000 members and 40
employees. It has experienced healthy growth with annual average asset increases of 4 percent, Dietz said.
The credit union will renovate space once occupied by Hackley Union Bank and during the Muskegon Mall era
Comerica Bank. A huge bank vault will remain as part of the credit union branch, becoming a focal point of the
renovation. 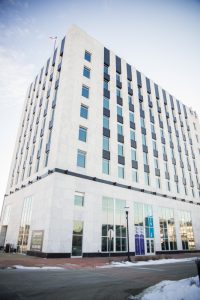