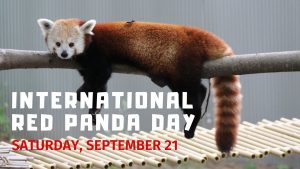 John Ball Zoo is hosting International Red Panda Day on Saturday, September 21. The day is to raise awareness of red pandas and the importance of their conservation.

John Ball Zoo is joining more than 100 zoos worldwide for International Red Panda Day. Guests can celebrate red pandas with games and activities, conservation information, red panda-themed face painting, and learn how to become a Red Panda Ranger. A Red Panda Ranger is a special title given to children who help spread the word about red pandas. Plus, the day wouldn’t be complete without a visit to west Michigan’s favorite Red Pandas – Wyatt and Wasabi.

While red pandas are growing in popularity, there are still many people around the world who remain unaware of this species or their endangered status. It is imperative that while spreading the word about red pandas that there is also an emphasis on conservation.

Red pandas are found in the mountain chains of Eastern Himalaya and parts of southwestern China. Marked as an endangered species, the global red panda population has declined by 50% over the last 20 years. It is estimated that there are less than 10,000 total, and as few as 2,500 remaining in the wild. Red pandas are considered indicators of ecological health of the Eastern Himalayan forests.

There will also be opportunities to support Wyatt and Wasabi through the Zoo’s animal sponsorship program: Animals! Animals! By supporting John Ball Zoo, people can save and protect wildlife around the globe.

Red pandas are unique. They are carnivores who mainly eat bamboo leaves and are considered the first panda. Red pandas are not related to giant pandas and were discovered 50 years earlier. They are the only living member of their taxonomic family.

John Ball Zoo inspires people to be active participants in the conservation of wildlife and our natural environment.