City of the Dead Tour – A Look into Muskegon’s Past 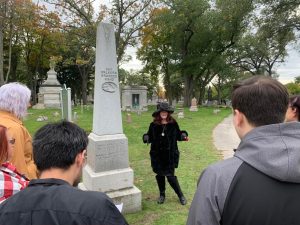 History comes alive at the annual City of the Dead Tour that the Harbor Unitarian Universalist Congregation has hosted for the past 13 years. The tour takes place each October at the Evergreen Cemetery located at 391 Irwin which is home to some of Muskegon’s most prominent historical figures. This year the tour was October 8-9th.

The City of the Dead Tour gives visitors an interactive, entertaining look at the lives of some of Muskegon’s famous residents. This year’s theme, “Scoundrels and Scallywags” details the lives of some of the more colorful characters of Muskegon’s past. Stories told at this year’s event included the story of George Bidwell and his connection to an infamous Bank of England forging incident, lumber barron and 3-term Muskegon Mayor John Torrent (who’s house still exists and houses the Hackley Library’s archives) and the enigmatic Hattie Dolly, a seductress who entertained Muskegon’s elite.

The City of the Dead Tour was originally started as a fundraising event to raise money for Harbor Unitarian Universalist functions, but it eventually became an event for anyone that has a passion for local. The event also gives volunteers a chance to spread positive life lessons. “The church anchors to this ideal that every person has an inherent worth and dignity, past and present,” says Anna EldenBrady, a Harbor UU member who has been involved with City of the Dead for 12 years. This reflects the 1st of 7 Principles that Unitarian Universalists live by.

The 2022 season so far has been City of the Dead’s most popular season. “This is a record year with the most attendees we ever had,” said EldenBrady. Almost 400 attended on Saturday with 300 attending the Sunday tour, totaling nearly 700 guests.

The City of the Dead Tour is a great way to learn about Muskegon’s iconic residents while also learning some optimistic life lessons.